with the ET 403 in the Lufthansa Airport Express version, we have realized one of the most well-known multiple units in Germany in a perfect implementation in N gauge. From our own production, you can obtain this multiple unit in analogue, digital or digital with sound (D&H) exclusively from DM-Toys. Now available! 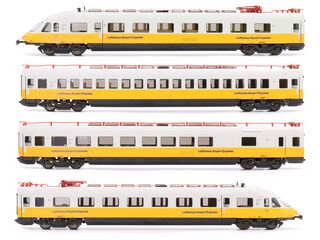 Electric multiple unit ET 403 DB Lufthansa Airport Express Ep.IV-V 4-part
399.99 EUR*
Art.-no. MU_N-T40301
Modellbahn Union
The model railroad Union Gauge N models of the ET 403 have a 5-pole motor with flywheels in an end car, light change white-red (individually switchable in digital operation), Next18 digital interface in all vehicles, interior lighting with digital interfaces, metal pantographs without electrical function, numerous applied details (partly made of metal), prototypical inscriptions as well as various interior fittings, NEM coupler pockets and Scharfenberg couplers in different lengths. In addition, a standard N hitch can be mounted on the front instead of the dummy hitch, and a dummy hitch cover can be attached.

In addition to the analog variant, the multiple unit is also available in a sound variant with a decoder and a new original sound. A digital version without sound is also available! The digital variants are each equipped with 4 decoders in order to be able to use the train flexibly and to be able to switch the interior lighting separately in each car. The decoders are already optimally matched to the model at the factory.

The length is 16.9 cm for the end cars and 16.7 cm for the middle cars. The train is equipped with short couplings as standard, for which we recommend a minimum radius of 250mm. With the enclosed longer couplings, the train is also suitable for R1 192mm. Couplings for operation as double traction are also included.

Example:
The ET 403 electric multiple unit is considered the forerunner of the current ICEs. The order for construction was issued on May 24, 1970, the first unit was handed over on March 2, 1973. From the winter timetable of 1974/75, the trains were used in what was then still 1st class IC traffic and ran mainly on the Bremen-Munich route. A total of 3 4-car units were produced. After the introduction of 2nd class in IC operations, the trains could no longer be used flexibly. As of 1982, the Lufthansa Airport Express (LHA) was used as a new area of application. The trains were used from Düsseldorf via Cologne to Frankfurt, thus replacing domestic flights on these routes. The trains were successfully used as LHA until 1993. The decommissioning took place due to corrosion damage. One set is currently being worked on. The trains had a cruising speed of 200 km/h and a documented top speed of 225 km/h. As with the ICE3 and ICE4 today, the drive was distributed among the entire train, the composition could vary from 3 to 5 parts, and double traction was also possible. An intermediate car is designed as a half dining car. Incidentally, the service staff referred to the Lufthansa Airport Express as the Apex.